Manang Marsyangdi Hydro-electric Project (MMHEP) is located on the Marsyangdi River in Manang district of Gandaki Province of Nepal. The Project area is located within the Annapurna Conservation Area (ACAP).

BPC owns 20% shares of Manang Marshyangdi Hydropower Company Ptd. Ltd, a SPV formed to develop and operate Manang Marsyangdi HEP. The Department of Electricity Development (DoED) has issued a Generation License (282 MW RoR type) for 35 years, and the Power Purchase Agreement (PPA) with NEA for 135 MW has been signed. Contractor’s camp and access road improvement were ongoing, but progress was slowed due to delay in PDA and financial closure. The process for amendment of generation license at 135 MW is ongoing at DOED. The water from the tailrace of MMHEP will be utilized by Lower Manang Marsyangdi Hydro-electric Project (LMMHEP). The Draft Project Development Agreement (PDA) has already been initialized. After the PDA and amendment of generation license, the financial closure will be completed and project construction will start.

The catchment originates at the Himalayas in Western Nepal and the source is Tilicho Lake. At the dam axis, the catchment area is 1,635 km2, with 901 km2 above 5000 masl. The Supplementary EIA in relation to change of boundary, type and capacity has been approved by the concerned ministry.

Lower Manang Marsyangdi Hydroelectric Project (LMMHEP) is located in the high Himalayan area of Gandaki zone of Gandaki Pradesh in Western Nepal. The Project area is located within the Annapurna Conservation Area (ACAP).

LMMHPP will use the discharges from the intermediate catchment as well as the MMHEP tailrace via a collection pond. The catchment area at headwork of the project is 1,693 km2, with elevations ranging from about 2100 masl to 7800 masl. The powerhouse of the project will be at an elevation range of 1,728–1,740 masl. BPC obtained survey license of the project from DoED in 2009 and conducted a feasibility study & EIA. EIA of the project has been approved by GoN in 2070. The connection agreement with NEA was signed in 2018 for 104 MW and amended in 2020 for 139.2 MW.

Generation License (140 MW RoR type) was received on Kartik 18, 2075. However, so as to fit to Marsyangdi Cascade projects, this project has been re-designed to take tail water of PROR Manang Marsyangdi project, making it a PROR project as well. The project has now been re-optimized at 139.2 MW to meet the requirement of NEA’s guideline for concluding the PPA. Accordingly, the Supplementary EIA (SEIA) was completed and approved. Industry registration for 139.2 MW has been completed, and a draft PPA is being signed with NEA. The Besisahar - Chame feeder road is a motorable road connecting the powerhouse and the headworks areas.

The Upper Marsyangdi-2 Hydroelectric Project (UM2HEP) is a high head, PRoR type project located along the Marsyangdi river in Manang and Lamjung district of Gandaki Province of Nepal. The project area is located within the Annapurna Conservation Area (ACAP). 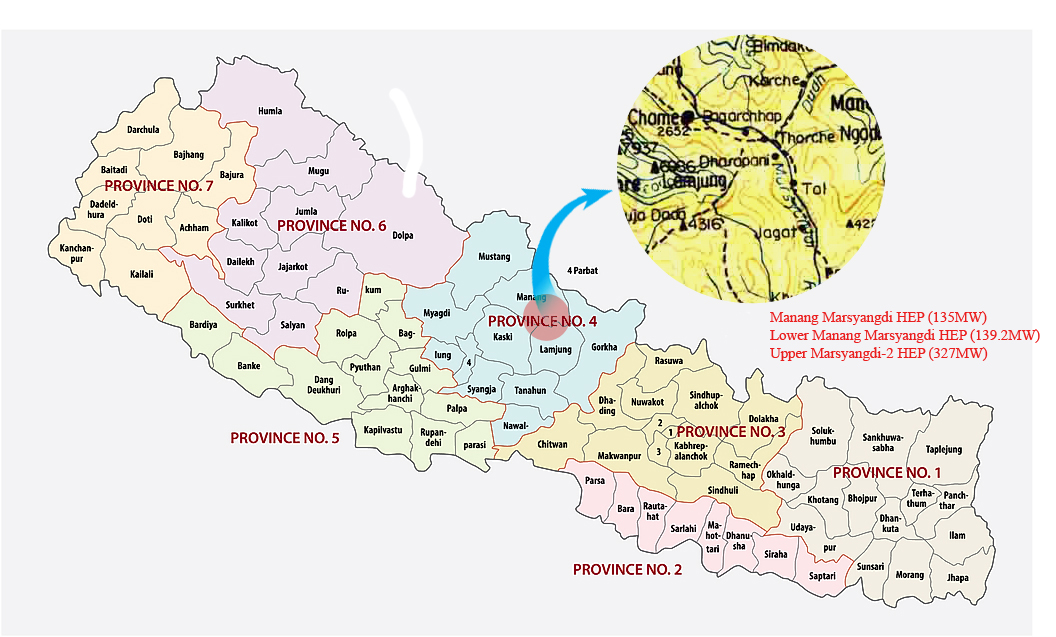 The catchment area at the project's headwork is 2,268 km2. The UM2HEP dam site is proposed about 2 km upstream of the village Tal. The underground powerhouse of the project will be constructed on the right bank of the Marsyangdi River, near Syange Village in Lamjung district. The survey license of UM2 was first issued to Himtal Hydropower Co. Pvt. Ltd, which is owned by GMR. According to the feasibility study, the GoN approved the project's EIA in 2069 for 600 MW. The ownership of the project has been transferred from GMR (majority shareholder) to three Chinese companies and Butwal Power Company Ltd.

Following BPC's acquisition of the project with Chinese investors, the project report was updated and the project capacity was re-optimized at 327 MW. The Supplementary EIA (SEIA) for the updated report has now been completed and approved. Investment Board Nepal (IBN) has given its approval for the investment. Following the passage of the PPA Act, an MOU was signed with IBN in order to obtain a survey license and prepare a DPR. Once the DPR is approved by IBN, PDA negotiations with IBN will be started.

Minutes of 29th AGM (in Nepali)